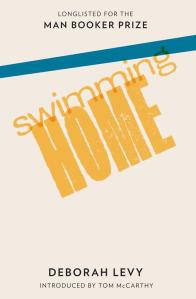 Swimming Home is the title of the Booker prize shortlisted novel by playwright and author Deborah Levy. The book opens with a rather heavy handed introduction by Tom Mc Carthy which advises us on how the novel should be interpreted. This unacceptable act of literary tyranny is further compounded by Mc Carthy, who seeks to reassure potential readers with a resume of Levy’s literary influences, which includes Lacan, Barthes, Deleuze, Duras,Stein, Ballard, Kafka and Robbe-Grillet.

It is a pity that Mc Carthy does not seem to have shared Levy’s reading choices. If he had he would have encountered Barthes 1967 essay, the The Death of the Author,which argues against exactly the type of literary analysis which his introduction subjects Levy to.

Mc Carthy’s introduction does a further injustice to the novel when he states; “If the setting and plot of Swimming Home are borrowed, almost ironically, from the staid English-middle-class-on-holiday novel, all similarities end there.” In fact all similarities do not end there. The book is undeniably what Mc Carthy claims it isn’t, despite his snottiness and half-assed claims of irony. This in itself need not be a bad thing if the writing is up to scratch, which is a decision the reader, not Tom Mc Carthy, must make. While I feel introductions may serve a purpose when contextualising historically important novels and their effects, for example D.H Lawrence’s Lady Chatterly’s Lover and its attendant obscenity trial, doing so with a newly released novel is both boorish and presumptuous.

If you skip past the introduction you will find a novel featuring impeccable prose, which is perfectly acceptable if not a little predictable. The story involves Joseph and Isabel Jacobs who are holidaying in a villa located in the south of France, along with their teenage daughter Nina, and their friends Mitchell and Laura. All present are members of the upper middle class. Joseph is that most elusive of beings, a rich poet and his wife Isabel, is a hard bitten,( is there any other kind?), international correspondent. Laura and Mitchell run a faltering antiques store which specialises in primitive weapons. One day over the course of their holiday the group of friends arrive home to find a beautiful young woman, who introduces herself as Kitty Finch, naked in their swimming pool. Stranger still the young woman is invited to stay by Isabel, a surprising move given her husband’s predilection for infidelity. Could she be plotting an end to her dissatisfactory marriage?

As Kitty settles amongst the holiday makers it becomes more and more apparent that she is a cuckoo in the nest. Obsessed by the poetry of Joseph, which she believes to be a mode of exclusive communication between them both, her goal is to have him read her poetry. Over the course of the novel it transpires that Kitty suffers from mental illness, the nature of the illness, as is often the case in literature, is never really defined. Whenever the mental illness occurs in the novel it manifests in a glamorous and cinematic way, as it tends to in stories involving Botticellian pale skinned, flame haired female poets.

The only other character to suffer from mental illness in the novel is Joseph, who you will remember is also a poet. This naïve perfume advertisement approach to mental illness detracts significantly from a novel which seems determined to take itself so seriously. Further flaws lie in the use of clichéd supporting characters, a randy French waiter, and a nature loving, German, dreadlocked stoner amongst them. Even the novels strengths are not without their downsides. An atmosphere of impending doom is successfully evoked but when said doom arrives it is unconvincing.

Where Swimming Home succeeds is in its portrayal of female characters excluding Kitty. Isabel, Nina and Laura are nuanced and complex creations. Of particular note is the depiction of the friendship between Isabel and Laura. When reading these passages it struck me how little genuine adult female friendship appears in literature without being simplified or over sentimentalised. While refreshing, this portrayal of adult female is not enough to carry an entire novel. I would hesitate to recommend Swimming Home to anyone but the most hardened Levy fan.